In a bid to try and save some money we actually contemplated not doing this “must see” part of Vietnam, as the tours were all pretty pricey. However, we realised we would only look back with regret and so opted for one of the well recommended river cruises which was also one of the most expensive; logical thinking!

Indochina Junk offered a less touristy package; venturing into parts of the bay that other boats were not allowed to enter and judging by how many tourists were making their way along the road from Hanoi to Ha Long we were glad we had opted for them.

The journey from Hanoi to Ha Long was around 4 hours, with an obligatory stop at the toilets, which just happened to be in a massive shop full of statues and other nonsense to sell to tourists. We were then taken to their HQ before being taken over to the boat. On first impressions the boat was in need of some maintenance, but being an old style junk made solely of wood it was apparent why it was so hard to maintain it’s pristine condition, especially with the bad weather in the bay. Otherwise it was a beautiful old boat, very elegantly decorated and we had one of the best cabins with our door opening right out onto the deck with views across the bay.

Sunset from the boat

On the subject of views, I was rather concerned that we would not get any as the famous Ha Long Bay mist was firmly in place on our arrival and looked to be going nowhere. Knowing many friends who have visited the area I was made fully aware of the likelihood of seeing nothing much at all, so with no expectations I decided to enjoy the experience for what it was.

Much like when we entered the Andean Explorer train in Peru, it became quickly apparent that we didn’t really fit in. Our fellow passengers consisted of honeymooners and older couples who most definitely were not living out of back packs. There were some great people on board however, just that they were holidaying very differently to us and I suddenly felt the need to brush my hair for the first time since leaving Australia.

We were on the 3 day cruise, which consisted of kayaking at numerous stunning locations, visiting beaches, exploring a fishing village and oyster farm and a truly unique experience of a romantic group dinner in a cave.  The rest of the meals were all had on board and it gave a great opportunity to mix with the other passengers who were from all over the world. On the second night, though, we were given the amazing opportunity eat in a cave that used to belong to the inhabitants of the island. Once owned by UNESCO it was then sold to the cruise company and the inhabitants were asked to leave, as their cooking in the cave was apparently causing damage (lighting 500 candles every night didn’t seem to be a problem though!). In a bid to look after the locals the company said “Don’t worry we will give you work for us” and so the 7 occupants were then given posts as kayak guides, chefs for the meal in the cave and a couple were moved to the fishing village. Forgive my cynicism but I was suddenly overcome with a disgust for tourism. How dare we with our stupid evening outfits on and straightened hair (well not me) go and invade somewhere that has been their home for generations to eat amazing food, drink wine and wallow in the beauty of the surroundings of someone else’s home that had been taken from them for the likes of us!

After airing my opinions and receiving a hushing smile from our guide, I decided to just try and enjoy it as much as I could. Thankfully we were sat with a lovely couple from Cambridge and shared a great night.  It really was a beautiful location and a very special experience. I suppose I just struggle with the development that tourism brings to these wonderful parts of the world where nature and simplicity prevail.

Fishermen who offered us some rice wine as we kayaked by

Our tour company most definitely did not disappoint and despite their being 500 boats a day that set off into the bay, we only saw 3 others, who were all part of the same company. For that reason alone I would definitely recommend them as the thought of being surrounded by other boats would have detracted from the whole experience. The beauty of Ha Long is the feeling of being in the middle of nowhere, surrounded by limestone rock islands emerging from the mists. The chugging of a fishing boat waking you early in the morning as it passes, the mist lifting and settling back in again in the evening, cruising along and watching the locals go about their day to day lives. That was what I loved most about Ha Long. 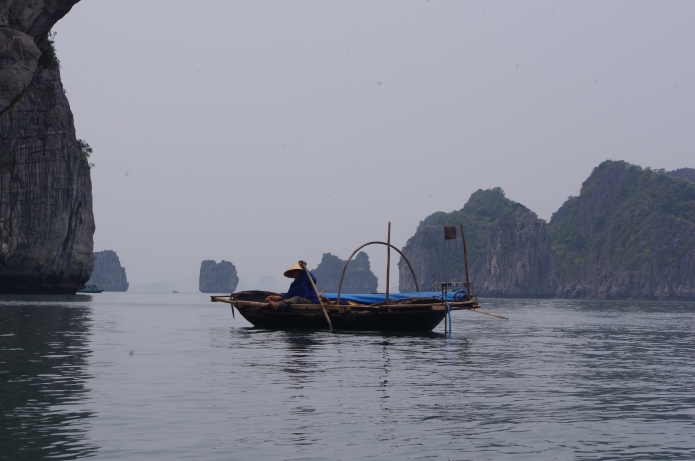 Old man out fishing in the bay

It was a great, relaxing 3 days; a million miles away from the craziness of Hanoi and we were even lucky to have sun for the second day!