Paradise doesn’t have to cost an arm a leg. The San Blas islands are affordable, stunning and still untouched by hoards of tourists. If sipping on cocktails in an all inclusive resort is your thing then please do not go; you will be sorely disappointed and more importantly you will destroy what makes this place so magical. These islands are for cans of beer drinking, hammock swinging, back to nature seeking travellers and local Panamanian/Colombian tourists.

We were not in the best of moods when we boarded the flight to Panama City (due the stressful experience at Rio airport) and so when we saw some video footage of the San Blas islands pop up on the screen, we naturally made the informed decision that we were going there no matter what! This was quite possibly one of the best decisions made all trip. And so it was that 7 hours later we were sat at a café in Panama airport googling galore for trips to the islands, whilst emailing our hostel in Bocas del Toro to cancel our booking for the next day! Andy found a recommendation and I called to see what we could arrange. An hour later we were booked on a 2 day trip camping on an island in the middle of the San Blas archipelago.

We were collected from the hostel at 5am and shoved in the back of a very cramped land cruiser for the 3 hour journey through the San Blas mountains. The last 2 hours of this journey, which were spent listening to Romeo Santos on repeat, were pretty horrifying not just because of said music choice. The road was unpaved in many places and undulated; dipping and rolling every 15 seconds and it appeared our driver was not one for slowing down at such points. Finally we made it to the small harbour where we met Girome, our organiser, who helped us into a boat. We had originally organised with him to stay on Carti island (which I had not heard great things about) and so we asked if we could stay on a more remote island and borrow a tent from him. This, funnily enough, is a more expensive option than sleeping in a home stay on Carti, but with some pretty awesome haggling, we got him down to $35 a day for all meals and tent hire.

The San Blas islands are an archipelago of 365 islands belonging to the Kuna people, the tribe that have inhabited this region for centuries. They are an independent indigenous culture exempt from the rest of Panama; not having to pay taxes or contribute in other ways and able to maintain their lifestyle in the islands they call home. They truly are such warm, friendly and funny people who still live a basic life with small elements of modernity.

The island we were taken to was about half an hour from Carti in the middle of the ocean and covered in palm trees. It was literally paradise. Known as Hook island, and inhabited by around 8 Kuna, this was as close as I had come to living on a desert island. Girome dropped us off and informed us he would set up our tent while we were on our tour that afternoon. Naturally it was beer o’clock…well it was 6 o clock somewhere in the world, so we headed into the lush turquoise waters to chill out. 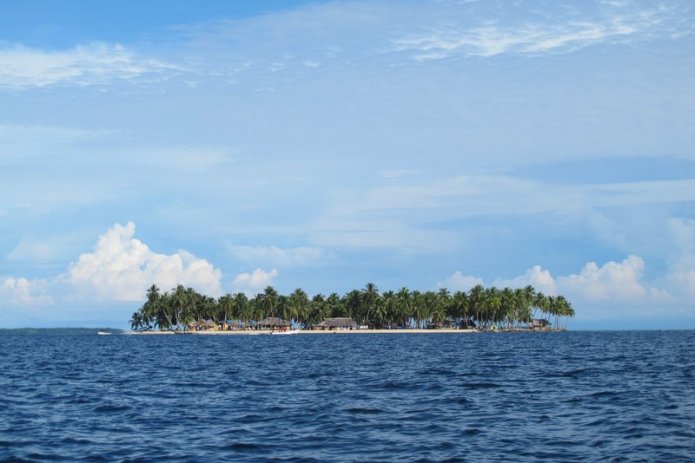 Hook Island – home for the next few days

Just what the Dr ordered

That afternoon, what looked like Gerome came to pick us up. It turned out, however, that this was in fact his brother (who seriously looked exactly the same) and what a character he was! Known as ‘El Gordo’ (fatty) by some inhabitants of a nearby island, he took us off to Dog island for the afternoon. On the way we passed by Starfish Alley (self named) where we were able to snorkel. 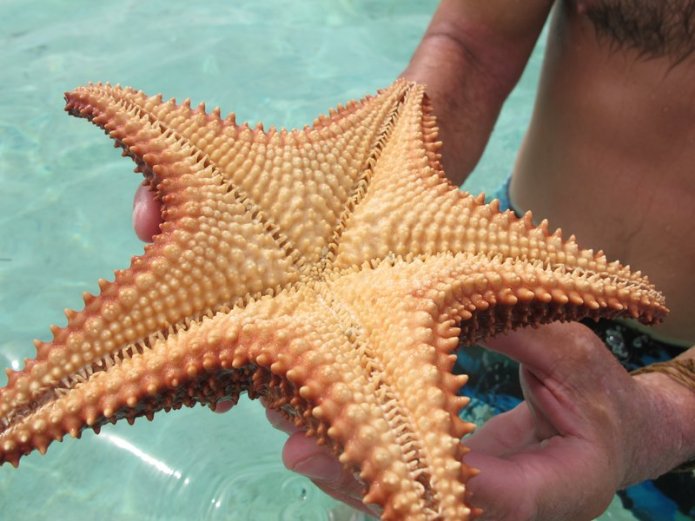 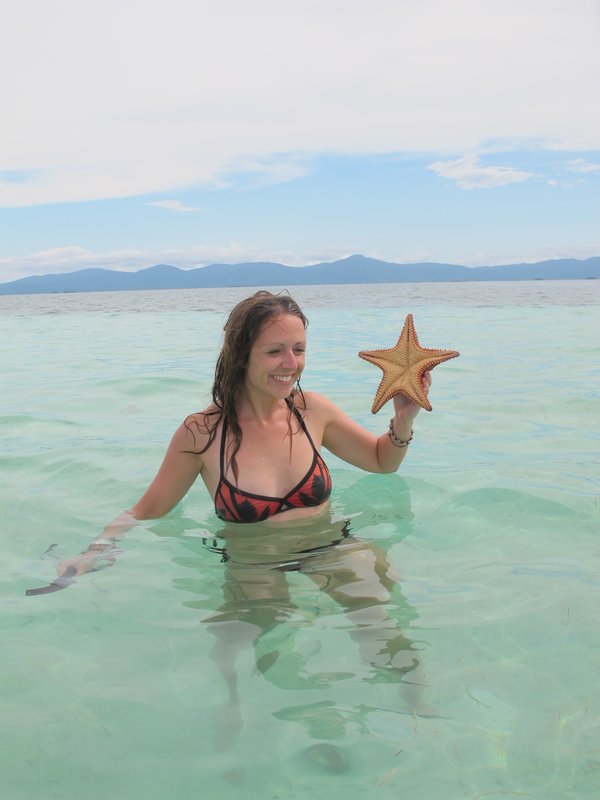 Dog island was rather disappointing; although it was absolutely stunning, it was full of revellers. It was a holiday weekend in Panama at this point (something that happens regularly in Panama we found out!) and as a result there were a lot of Panamanians looking for a good time. The Panamanian way of doing this consists of:

5) A boat to escort you around to various islands. They really were a great set of fun-loving people.

Kuna hut on the island

The snorkelling around Dog Island is really impressive, especially around the ship wreck which is just off the shore. We saw heaps of different fish sneaking around the crevices and patrolling the exterior of the sunken, rusty boat.
We came back to our group after a walk to find the two Panamanian girls on the trip were pretty intoxicated and had become very ‘friendly’ with our guide (El Gordo). He explained to us that he couldn’t help this, the girls just couldn’t resist him. Nearly chocking on my beer, I agreed what a hard life it must be and wished him luck. As the sun set we all boarded the boat back to our island, with the drunk Panamanian girl needing some assistance. Once there we were met with a plate of fresh lobsters before retiring to our tent for the night. An easy decision to stay 3 nights instead of 2 was made; this place was really too good to be true.

Doing what we never do but became pretty pro at…

The morning brought some rather heavy rain, and the main man of the island came to ask us if we wanted to move our bags into one of the cabins to keep them dry. They were really so friendly. That day we headed off to see some more islands and found another remote one like ours which was beautiful. The weather was beginning to turn, and so we spent that afternoon chilling in our hammocks with a book. As bed time came it became apparent that we were going to be in for a bit of a stormy night, and at around 11pm the locals came and asked if we wanted to move into a cabin as a huge storm was approaching. Being surrounded by palm trees in the midst of an electric storm was causing some distress and so we moved our stuff, including the tent, into one of the cabins and settled ourselves onto the most uncomfortable bed I think I have ever tried to sleep on in my life. 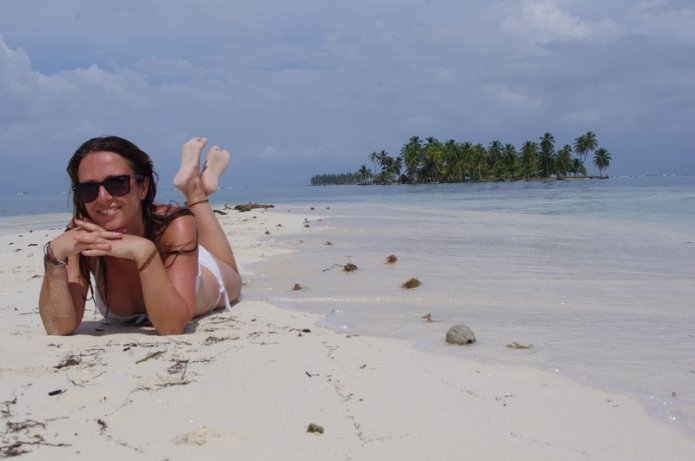 We opted against a tour on the final day as we really wanted to just spend some time on Hook island. The weather was still not great but it picked up throughout the day before turning rather sour again at night. This time, back in our tent, we awoke at around 3am to another approaching storm, and took ourselves back into the cabin to prevent ourselves getting drenched in the leaky tent. It made us realise just how at one you are with nature living in such remote places. We had no communication whatsoever with the outside world, which was amazing, and everything we did depended on the weather and the resources available…such a natural and wholesome existence. I loved it and really didn’t want to leave.

Unfortunately, we had to, and so that afternoon we took the boat back in a storm to the mainland before the drive back to the city.

Reflecting on the natural existence in San Blas

Dinner time is by far one of my favorite times of the day when camping. Sitting down and preparing vegetables as the sun starts to set is the perfect opportunity […]
Camping Dinner Delights
Loading Comments...
Comment
×
<span>%d</span> bloggers like this: