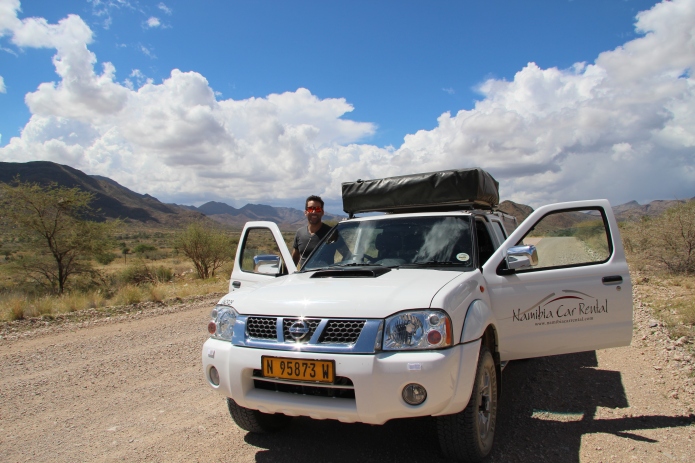 Nige the Nissan…home for the next fortnight

Endless empty roads, continuous changing scenery, wildlife on the roadside and camping in some of the most amazing spots in the World; Namibia really is a road trip heaven.

I raced from the plane, flying through the airport in a bid to be the first through passport control. Deftly I skipped through, choking on my own stupidity, mixed with phlegm from an almost asthma attack brought on by the sprint through Johannesburg International. Whilst I waited at the baggage area, the minutes ticking by, suspicious looks at my coughing fits were flung at me from ‘ebola phobes’. Half an hour until check in for my next flight closed and the bags were still nowhere to be seen. A fellow passenger, also with a tight connection and having to pick up his bag before heading to the domestic terminal joined my side. Twenty minutes later, panic set in. His bag arrived, passing me an apologetic smile he ran off to catch his flight…he was going to make it. Minute by minute passed and it became apparent that I wasn’t. Finally ‘Arial’ flopped herself onto the carousel; grabbing and heaving her onto my back I made my futile dash through the jam-packed airport.

I knew it was coming but when I was met with the reality of “We’re sorry; check in has closed” it hit me like a fist in the face. I couldn’t control my emotions and started sobbing like a small child. I hadn’t seen Andy for almost 3 months now and the rush from work combined with the 25 hours of travel I had already endured, seemed to be too much for my fragile self. I had to get there tonight or the whole of our meticulously planned trip would fall to pieces; each stitch dependent on the one before.

After being told there were no more flights that day, queueing in a 45 minute line and rinsing all of my phone credit contacting Andy, who was already in Namibia I eventually managed to get myself onto a flight leaving in an hour. I had to deal with the extra expense and loss of previous flight money…all I cared about was that I was on my way; it was all going to be ok.

I was met in Windhoek by Nelson Mandela’s long lost twin, who drove me to the guesthouse Andy had already checked in to. If anyone is wondering what it is like to see each other after all that time then forget slow motion running into each others’ arms, being whisked off my feet and flung into a swirling embrace as the sun sets. In reality it’s a bit weird…trying to get used to a face that at one point was more familiar than my own, wanting to tell each other everything that has happened over the past weeks but not knowing where to start. After a hearty feed at Joe’s Beer House it was as though we had never been apart. Time for a good night sleep…tomorrow was the start of the adventure!

An early morning supermarket shop and half the back of the truck filled with newly acquired wine and beer and we were off…headed off to Sesriem for our first night in the roof tent. The journey was stunning, we passed vast areas of lush green vistas, which ebbed away into desert-like flats out of which mountains grew and shrank. We were not long on the tarmac road before we waved goodbye to comfort and hit the gravel tracks; dust blowing behind us as we left work, worries and my new glamorous hairstyle behind. We were entering a wilderness of pure serenity, matted hair and basic essentials (alcohol, of course making it into the top 3) all to the backing track of Toto’s Africa! 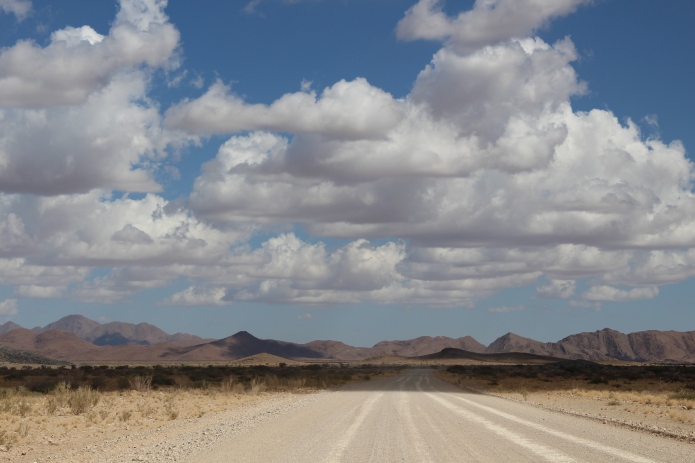 After around 7 hours we arrived into Sesriem. The campsite was a little bit of a let-down with tourists galore, but I had been told by a friend that it was the busiest we would come across in Namibia. We nipped down to the Sesriem Canyon for a scorching mooch about. Andy set up camp (my duff shoulder and midget status rendering me useless at the job I am normally adamant I know more about). We got a fire going, well Andy got the fire going, and I began preparing the first of our meals to be cooked over the braii (Southern African barbeque). From this point on, everything was cooked over the braii, due to the malfunctioning gas canister. As the sun set we nibbled on some game steaks and veggie goodness, washed down by one Savannah too many. All was packed away and we clambered into the tent ready for a 4am awakening so as to hit the sand dunes for sunrise. 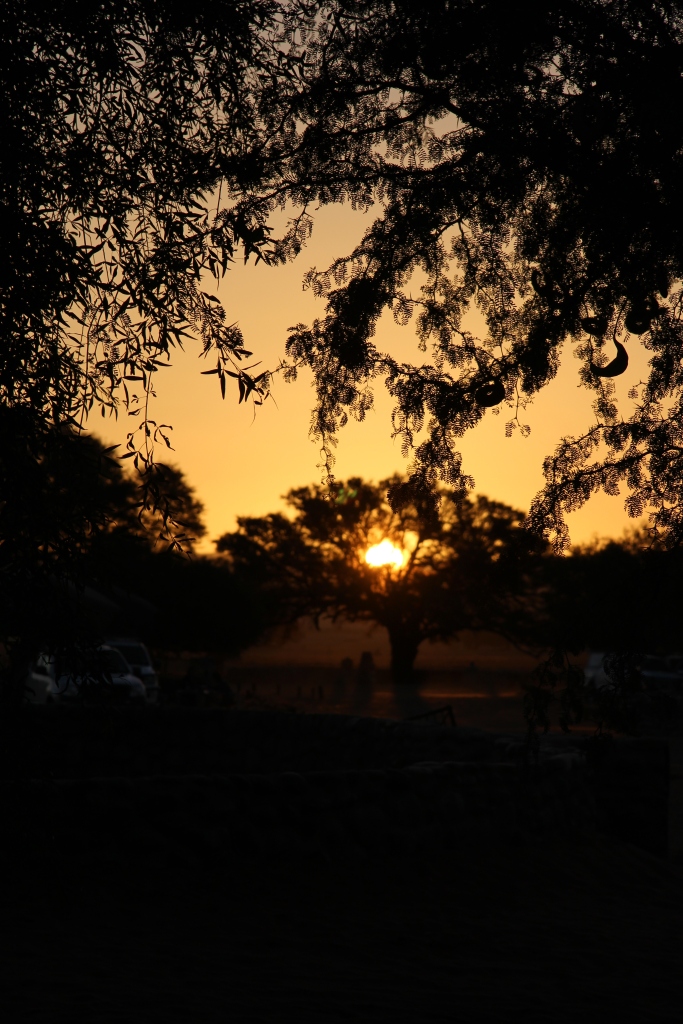 The fire expert gets to work!

Unfortunately, despite my exhaustion, I suffered a broken sleep; disturbed by a cow outside the tent (little did I know this would be the least scary encounter with nature over the course of the next fortnight) and Andy searching the tent for a manual on how to go to the toilet at 2am?! With no recollection of this, Andy decided Savannah was not the drink for him! With a slower start than we had hoped, we managed to get packed up and on the road out of the campsite for the opening of the gates at 5am ready for the 45km drive to Dune 45 (so called for it’s proximity to Sesriem). Despite the darkness, the journey was nothing short of stunning; moonlit dunes rose from the desert; surrounding us. After just shy of an hour, we reached the parking spot ready to join the long line of ants climbing the thin ridge of the dune…not quite the solo dune shots we had anticipated but stunning all the same. As the sun began to grace us with it’s presence, casting gorgeous shadows over the dunes, we realised that all we needed to get some photographs without anyone else, was a bit of leg power. So we pushed on and past everyone else. 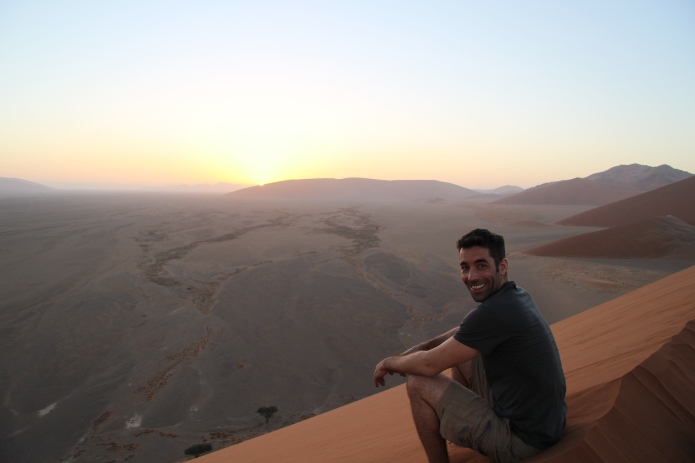 Pretty happy with himself

On the way up 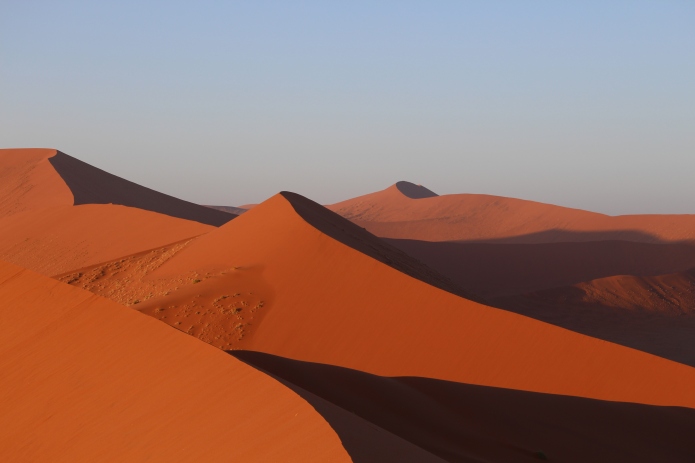 After a while we made our way back down and headed on to Sossusvlei passing a hasty ostrich and a Gemsbok on the way. We headed off the road entering the 4WD only route, only to find ourselves stuck after 5 minutes due to the car refusing to go into low ratio and Mr Marine ignoring my idea of lowering the tyres (I can’t drive but I did live in the desert!). Andy, a semi 4WD expert was raging that we had to get someone to help us out of pretty lame conditions, compared to what we were going to face later on in the journey. It was a needed moment of stress; allowing us to ‘air’ a few opinions about one another before we hit the real deal. Thankfully we were back on the road in no time, with a healthy breakfast stop and we were ready to make the journey to Swakopmund.

Dinner time is by far one of my favorite times of the day when camping. Sitting down and preparing vegetables as the sun starts to set is the perfect opportunity […]
Camping Dinner Delights
Loading Comments...
%d bloggers like this: