Magical Milos – Adamas and around

Nestled away in the Cyclades lies one of Greece’s hidden gems. Whilst most visitors head down to the more famous islands of Mykonos and Santorini, perhaps stopping at a few others on the way, we were heading straight to the gorgeous volcanic isle of Milos.

Having read a travel magazine article on the island a few months prior, I had already fallen in love with the place and had my heart set on a trip there. Bearing in mind that our expected arrival onto the island was planned to be after scaling the length of 4 countries by bike, we had decided to book a couple of nights at a hotel owned by a friend of a friend and in an airbnb spot in a fisherman’s hut. We would deserve the luxury we told ourselves! As it turned out, after my mammoth failure on the bike, this was not the case but after the last few days of travel we were most definitely looking forward to sitting still for a while.

The Port of Adamas

As I already mentioned we were supposed to be camping but were lucky enough to find a room for a mighty fine price in Adamas. The way that this actually came about was that John had enquired at the Corali Hotel as to the availability of a room. When he went back to confirm our booking at 9pm, there was no one to be found on the reception but 4 keys had been left out. He decided to take this as a sign that we had the choice of these rooms so he went sneaking about settling on the finest option. And so it was that for next to nothing we ended up with a double en-suite room, complete with wrap-around balcony! When we went to check out the next day no one was around so we called the number on their business card and within 20 minutes a short white haired man arrived on his scooter. He was in a hurry and after a quick conversation and some back slapping, we had sorted ourselves out with a room for another 3 nights for even cheaper than we had originally been offered!

Adamas is almost like a ghost town in the day time as nearly all of the tourists board boats to head out a sail around the island and it’s stunning caves and beaches. By night it comes alive with hungry holiday makers sitting outside of restaurants enjoying some pretty good Greek fare. We tended to make out own food, choosing the amazing bakery in town to supply us with some fresh pastries for breakfast alongside home-made Greek coffee. The amount of fresh produce available in town made it nigh on impossible to cook anything other than delicious dinners. One night we did opt to eat at the Taverna Barko which we would definitely recommend for it’s hearty local dishes as well as perfectly cooked tuna steak.

Old men chatting along the beach from Adamas

We used the port city as a base for beach walks, driving round the island and heading off for day cycles, one of which we were able to do alongside Gill and John. On this occasion John took great delight in telling Andy of the cycling incidents he had witnessed me having in the past, namely; me rolling backwards on a bridge of pretty much no gradient, crashing into a car at a set of traffic lights and just falling off sideways when I stopped, leading to me being buried under the bike in some grass! Needless to say he was pretty surprised with my progress and as we pounded up the many hills of the day was impressed with what we had achieved. It was nice for someone else to acknowledge how hard cycling in this heat actually was, even without the paniers. Still, it didn’t stop me from hating almost every hill! Thankfully a stop at the campsite’s amazing restaurant for lunch sorted me right out.

Boats in the harbour town of Adamas 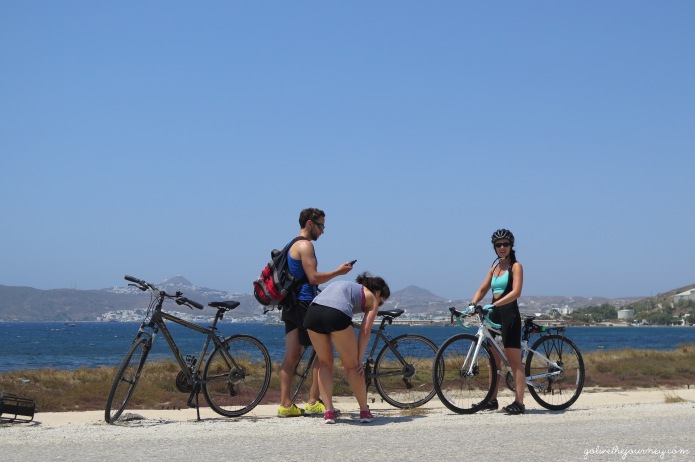 Cycling around the island

Milos’s campsite is around 6km outside of town from Adamas. It is perched at the top of a cliff overlooking a beautiful bay. It has it’s own swimming pool, restaurant and bar and cooking facilities. When we checked in it became blindingly obvious that camping in Greece is a totally different thing to Croatia. In essence they try and cram as many tents into the smallest space available. Outdoor space for cooking and chilling is absolutely out of the question and instead everyone is encouraged to use the kitchen areas. This would have been fine had it not been for the French high school trip that seemed to fill most of the campsite. Hormones, loud voices and cigarette smoke flew all around the campsite, especially at night, when an early night was imperative due scorching temperatures forcing you to commando roll out of the tent at the crack of dawn. Camping on Milos, anywhere other than at the campsite, is forbidden and comes with extortionate fines. For the cheap €18 a night for both of us we really couldn’t complain. We cycled to and from the town on a daily basis over the few hills that I dreaded so much on the way back to camp, until I remember coming back one day thinking: “Where is that hill that I hate so much?” only to find that I had already conquered it! Boom…at last I was getting better at this cycling thing. The crazy wind on the island led to some of the worst head winds I have ever experienced, causing us to have to pedal downhill on a number of occasions. It was pretty grueling stuff, but fun all the same.

One of the hills up to the campsite 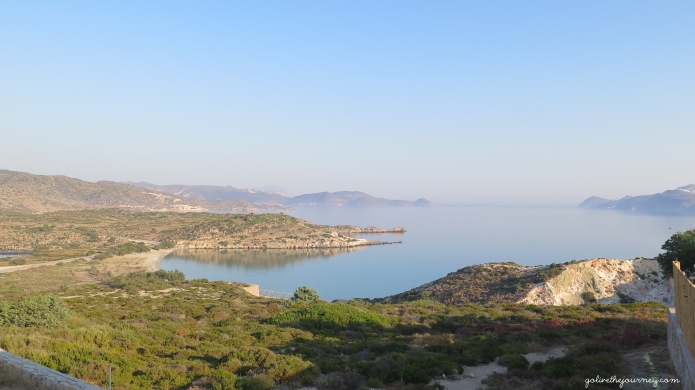 View from the campsite over the bay

On another occasion we took a day’s sailing trip (something we were never going to do) out to the ridiculously stunning bay of Kleftiko. We opted for the well recommended ‘Excellent Yachting’ excursion and after a nightmare morning trying to find where to leave our bikes locked up in the town and trying to get money from an atm during the Greek Bank Crisis (the only time we ever had any trouble I will add), we unwound on the deck of the gorgeous sail boat in the scorching sun. We met some lovely people on board, including a couple from Norway who we spent most of the day drinking beer and chatting with. The guys who led the trip were great fun and clearly keen on snapping as many photos of hot girls as possible. Needless to say I think Andy and I made it in to about 3 photos from the day’s album that consisted of around 350! Nevertheless, we had a great time snorkeling through tunnels of turquoise water, learning about the history of the island and it’s volcanic wonders, hearing how it was a hub for pirates while sipping on beers and swimming in bays along the way. A fantastic day and the cycle back to the campsite had never been so fun!

On the boat trip to Kleftiko 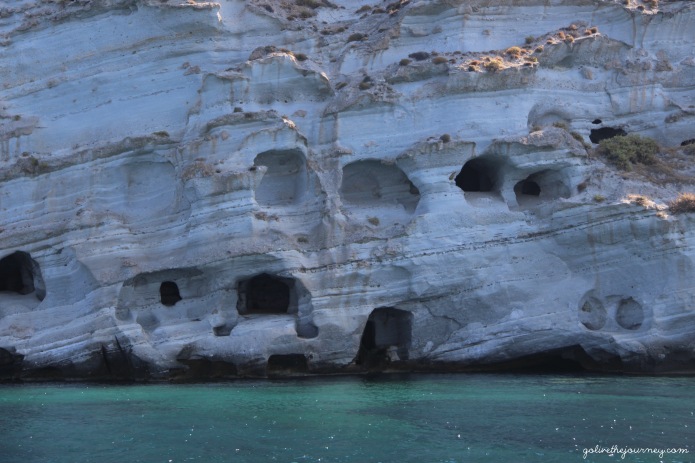 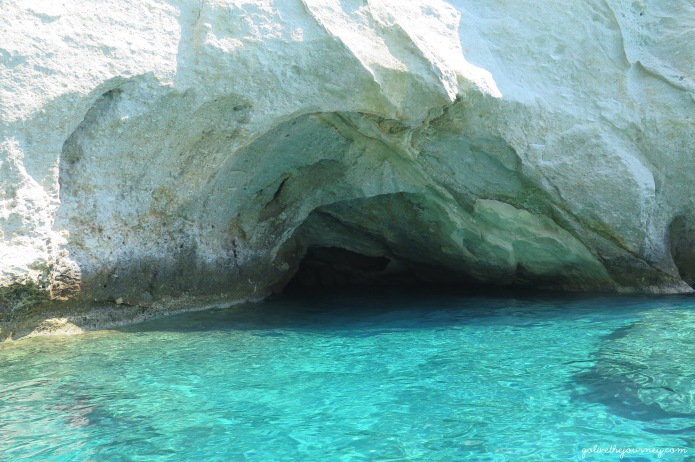 Our old friend at the Corali allowed us to store our bikes in his little cupboard by the front door (unlocked and accessible to any passer by at any time of day/night) for 4 days while we headed to our booked accommodation in Trypiti and Klima. So I said goodbye to Olivia, hoping it would not be the last time I would see her. I’m not going to lie, a little part of me was hoping she would get stolen and I would never have to get on that saddle ever again: “Oh there goes my cycling future…what a shame Andy, it clearly just wasn’t meant to be and I just can’t afford a new one!” Unsurprisingly, the Greek hospitality didn’t fail us and four days later we opened up the door to find the bikes sat there amongst a few cockroaches and bottles of cokes crying to be used again.

Sunset at the campsite