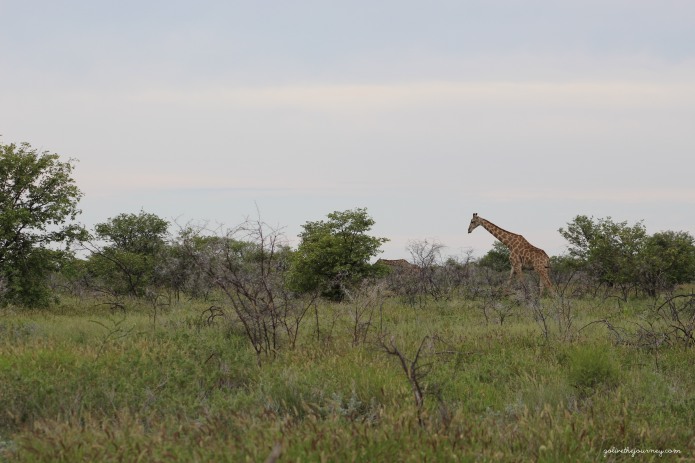 Namibia had wowed us with it’s scenery, but we were yet to experience much of it’s wildlife. A trip to Etosha promised some great delights, and whilst we knew they were surely to be overpowered by our trip to Botswana, we couldn’t not visit the national park. Despite a rather dull journey there, including the standard fall-out…we were not disappointed.

We woke up early, certain we had heard rhinos/elephants in the night (something big was definitely stomping about nearby), had a shower in our amazing rock shower room and then headed off after breakfast ready for Etosha. We stopped a few hours in at the Choppies at Outjo; our last chance to stock up on supplies before we hit the national park.

Boring road all the way to the park

The journey was pretty soulless, thankfully some metalled road for most of the way so that we could gain ground pretty fast but pretty nondescript compared to the vistas we had become accustomed to. The town of Outjo was pretty busy with tourists; a small place with a backpacker vibe cum safari tour guide drop off destination, but the supermarket didn’t fail to disappoint with a superb selection of biltong and chilli bites. Andy waited in the vehicle outside whilst I went in and stocked up on supplies; this was a system we had worked out to ensure that the vehicle and it’s goods were safe. So far we hadn’t been led to believe anyone would interfere but we didn’t want the risk and quite frankly it got the job done quicker if I went in and did all the shopping myself. In the supermarket I made friends with a young boy and a lady at the biltong counter who had the most amazing hair ever. Unfortunately, I didn’t get a photo, but it was a typical style of the region she informed me after I complimented her, with braids in three different shades all twisted together – pretty cool.

Stacked up with beer and various food wares I found Andy back in the truck. It was scorching hot and there were a few dodgy looking folk hanging about. Andy was trying to use the data on his phone to organise some life admin, without much success. He was wanting to hang around a little longer to get this done, but I was keen to hit the road again; we still had quite a way to the national park and it was imperative we got there before sunset otherwise we were not allowed in. A small disagreement was had on our exit from the township. Andy was hungry and had been driving for a long time and it had clearly taken its toll. A quick stop and a bite to eat and we were off again in a much better mood.

Finally, we entered the national park; paying a small fortune for our two night stay there. Thankfully we were not staying at the campsite by the main entrance, as it was exceedingly touristy and the scenery was not much to write home about. After sorting our permits we drove the 45km to our camp at Halali (the middle camp spot). As we were limited to a 60km/h speed limit, and since we got ridiculously excited every time we saw some form of wildlife in the far distance and had to stop for a photo, it took us over an hour to reach camp. The campsite was well equipped, but a little busy for us compared to what we had been accustomed to over the past few nights. Still it had a great watering hole, which we frequented on a regular basis, where we sat that evening and watched a stunning sunset with a couple of beers before being entertained by two elephants that arrived at about 9pm. As if this wasn’t exciting enough, they were watched by two lionesses that stalked in and sat on a rock around 70m from us. It was an exhilarating experience that by the end of our trip was of little comparison to many more of the encounters that we would face, but a great way to begin our immersion into African wildlife. 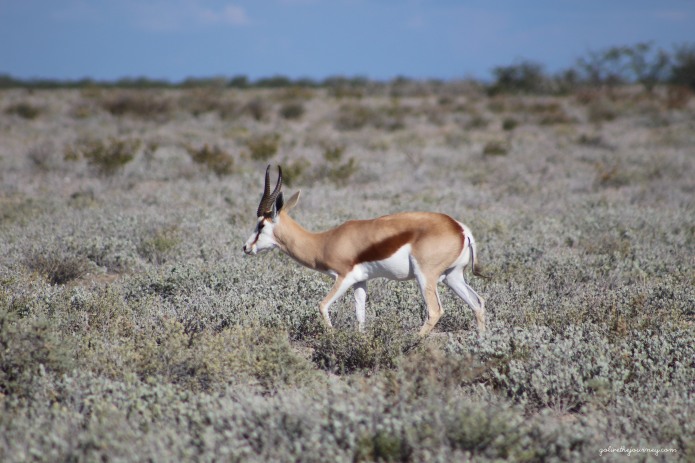 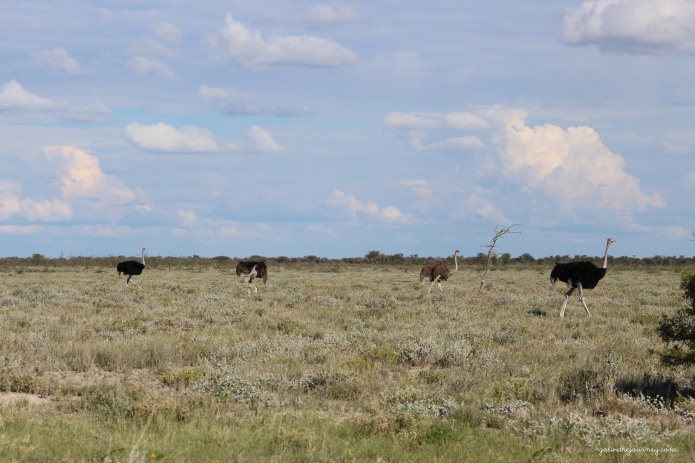 Love this shot of the ostriches all lined up. 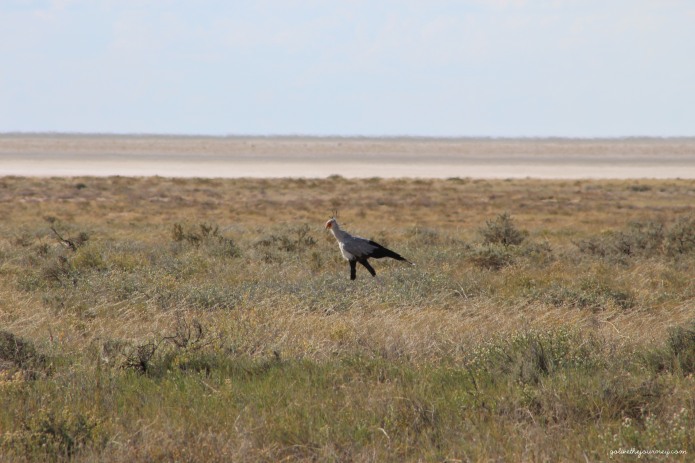 Weirdest bird I have ever seen in my life, which walked like a human!

So cute feeding each other! 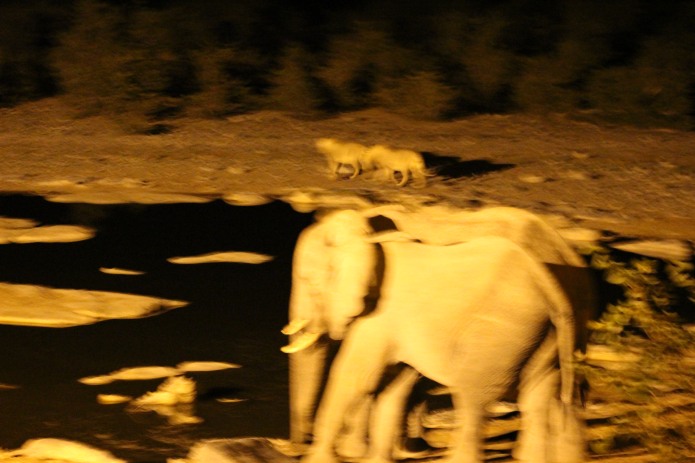 Extremely blurry shot of the lions watching the elephants. Clearly I was a bit overexcited!

The next day we decided to take a drive around the park. Annoyingly this meant having to pack up the roof tent (the only negative to our set up being it needed packed away every time we wanted to use the car), but that wasn’t so bad as we had our eye on a different pitch for when we returned. It is a funny thing, camping. Everyone looks for the best spot and gets really anal about making sure they have the best one. There were a couple of real crackers in this site: one that had been bagged by some pro photographer and then another two that a selfish couple had hogged by placing their vehicle across both pitches. After arriving the night before and noting their selfish ways we proceeded to make judgements about the kind of people that would do such a thing, only to realise at dinner time when they returned that it was actually the cool couple we had met on the sand dunes earlier in the week! No matter, they had now been judged. In the end we had to settle for a pretty non-descript patch of sand next to a bin and a tree with no iota of privacy. 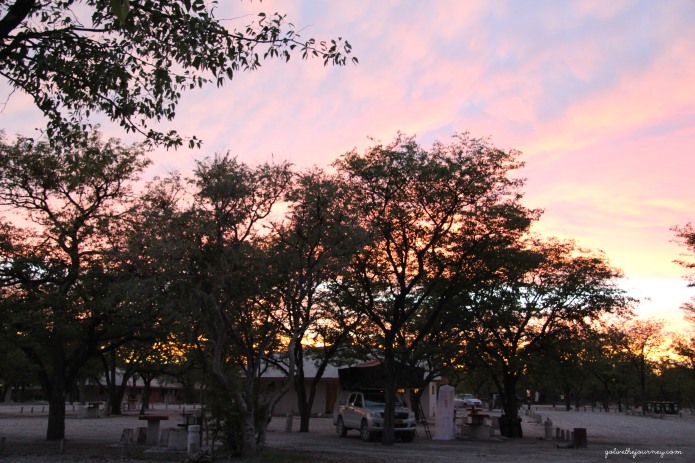 During the drive we were stunned by the amount of wildlife within such close proximity. Two zebras were right next to the car on our exit from the campsite, a hyena crossed our path, giraffes were all over the place and then finally on our way back we were halted by 2 elephants on the road. 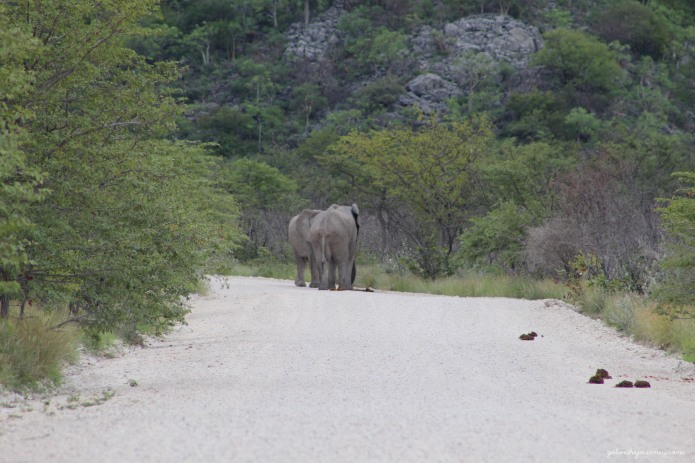 Uh oh! Not what you want to have on the road when you turn the corner.

Sticking out its tongue!

Smiling for the camera!

This cheeky little thing was definitely up to some mischief. 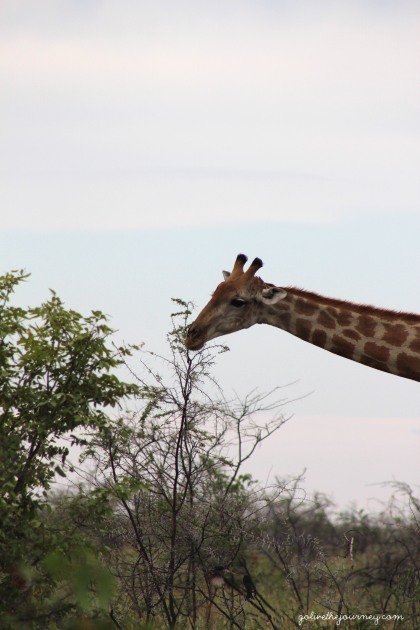 We decided to make lunch and dinner on our return, to avoid the swarm of mosquitos and other biting insects that seemed to hang about our braii at dinner time the night before. Unfortunately we were instead visited by a swarm of flies, which turned the cooking into an absolute epic. We munched down some wraps in the car and then headed to the watering hole for a much needed chill. Nothing much was going on, so after about half an hour we began heading back. Suddenly we heard some shouts and a flapping woman came running down after us shouting “Elephants!” We ran back up and sure enough there were two elephants right there almost close enough to touch. We enjoyed a great wee while sat there taking them in before heading for a shower, picking up our dinner and a bottle of wine, and taking our pew at the watering hole ready for the evenings visitors. 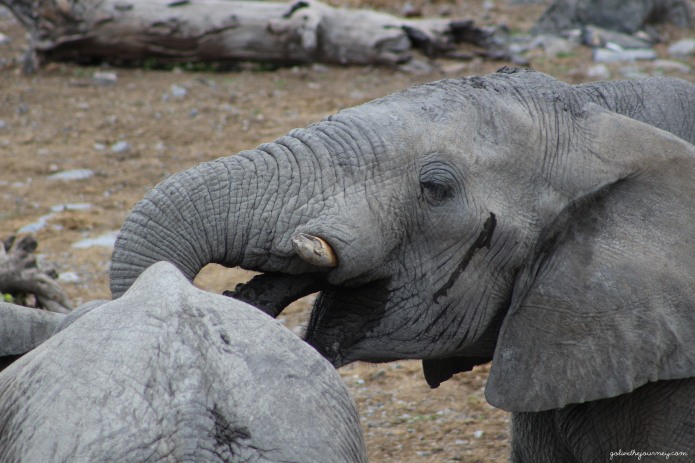 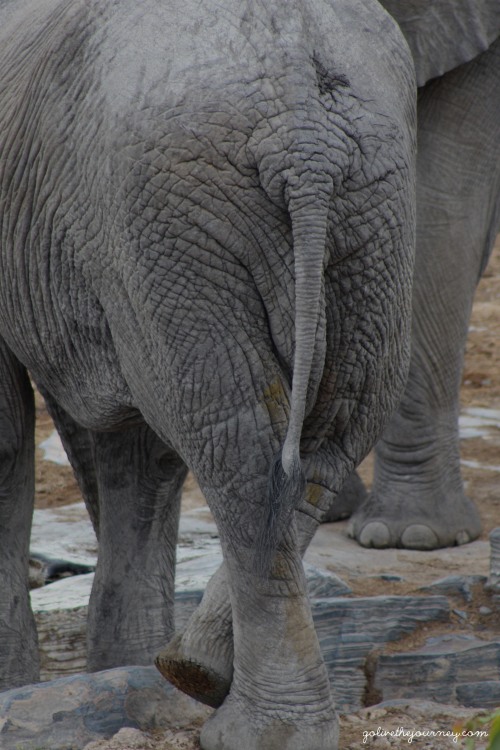 Elephants do this cool ting when they drink, standing on one foot. Very cute!

Giving us a sideways glance on its way out of camp.

As well as another couple of elephants gracing us with their presence we were extremely fortunate not to just be visited by one rhino, but 4! It was an incredible night and we were both on such a high. It was hard to leave but we had to call it a night as we needed to be up and rolling out of the campsite at sunrise when the gates opened for the mammoth journey the next day.

Journalling at sundown by the watering hole

One of the 4 rhino that visited us that night.

Dinner time is by far one of my favorite times of the day when camping. Sitting down and preparing vegetables as the sun starts to set is the perfect opportunity […]
Camping Dinner Delights
Loading Comments...
Comment
×
<span>%d</span> bloggers like this: