Nothing beats a last minute camping trip. It was the bank holiday weekend, the sun was shining and Andy was in country so we decided to make the most out of it by heading out of the city and back to the Highlands. The decision was made on the walk into work that morning, leaving Andy essentially 4 hours to get the whole thing planned, packed up and organised for us to leave after lunch. Unfortunately our lastminute.com ways were not working in our favour as there were literally no cars for hire for the whole weekend in the city for less that £400. This would defeat the purpose of a cheap weekend away camping! In the end the only option Andy managed to sort was from the airport and for only a 2 day hire. It was better than nothing so we went with it.

A friend offered to take me back from work, pick Andy and our gear up and then drop us at the airport. By about 3pm we were on the road and headed North. A friend had recommended Glen Affric as a great place to explore and do some hiking. It was getting pretty late by the time that we were nearing and we decided that our best bet was to just base ourselves at the Cannich campsite and then head along the Glen for some hiking the next day.

Getting the kindling ready for the Solo Stove for coffee

The weather sadly didn’t remain as pleasant come Saturday morning but we headed off anyway along the tiny road that skirts Loch Beinn a’ Mheadhoin down towards Loch Affric where we parked up to begin a hike into the hills. It was a little windy but the rain held off and we enjoyed a good few hours of fresh air. 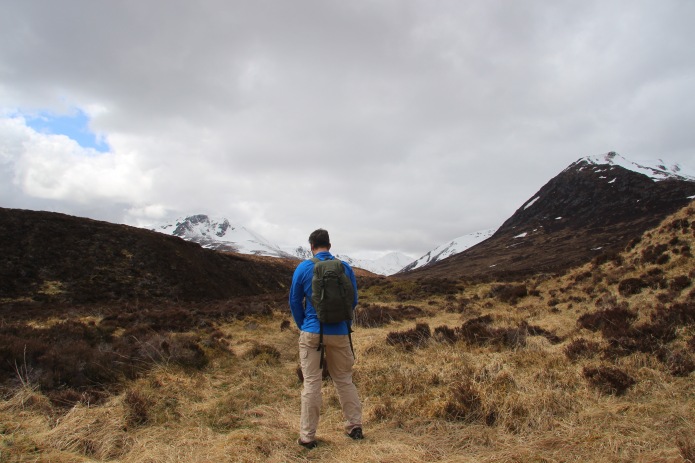 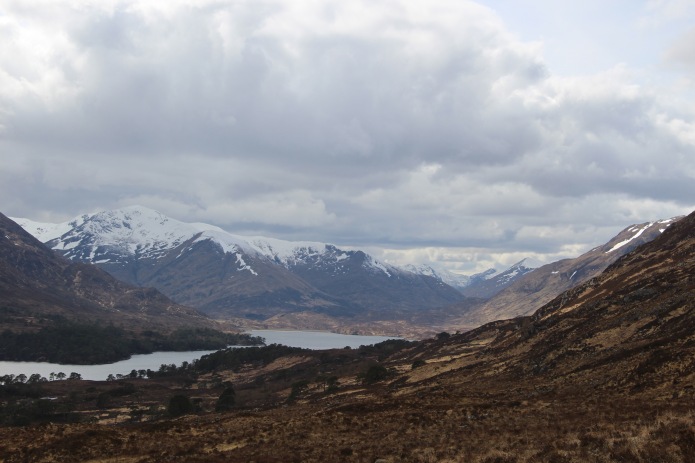 On our way back to the campsite we took in the loch side views, singing along to Of Monsters and Men. Suddenly Andy drew up on the side of the road.

“What are you doing?” I asked

“Having a look down here.” he replied and next thing we were clambering down a small track towards a beautiful beach that jutted out of the loch side. “This would be a great wild camping spot!” And that was how half an hour later we were back at camp pulling the tent down before pitching it up in the wilderness. The spot had obviously been used before as there were rocks marking out a previous fire, which, after we had pitched the tent, Andy got on with building whilst I prepared the food for dinner. I had never wild camped in Scotland before and I really couldn’t think of a more beautiful spot to do so for my first time. Whilst the weather wasn’t the best, it was dry and with the fire to keep us warm there really wasn’t much to complain about at all. 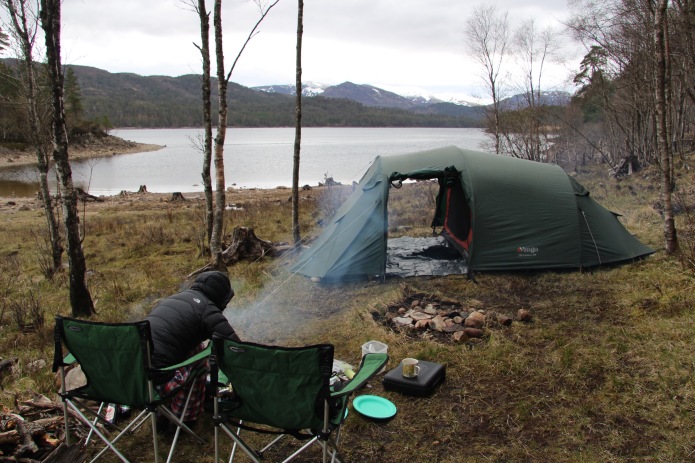 After dinner, some wine and a rather oversized dram (or 2) of Laphroig we headed to bed. It was cold but the whiskey was warming its way through my body as we snuggled up. Our set-up was no different to the night before but it just felt a lot  cosier, almost like my body knew it was surrounded by fresh water, trees and mountains rather than other tents and picnic benches. After a couple of hours we were woken by rain and come morning it was clear that it had no intention of stopping. Breakfast and coffee were cooked inside the tent before we discussed our pack up strategy. We had to get the car back by the afternoon so couldn’t hang around long enough to get a decent walk in. 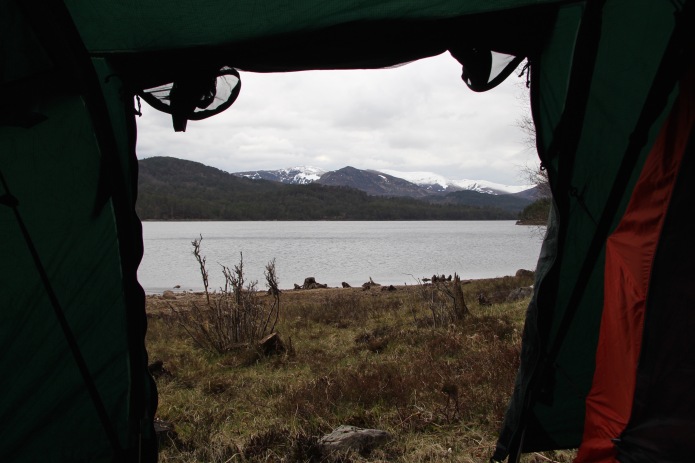 So began ‘Operation wet pack up’, which was really not pleasant at all as the car was quite far from us so we had to drag each armful up the hill, throw it in and then come back for the next batch. It was at this point I was suddenly attacked with the urge to go to the toilet and I’m not talking about a wee. I tried to hold it in, but it must have been the effect of the drink the night before as this thing wasn’t going to stay put. I haven’t had to do a number two in the wilderness before and this didn’t seem like the optimum moment for my first experience. Not only was it chucking it down, but we hadn’t brought a shovel with us as we weren’t expecting to wild camp. So I got a rock and headed off to a spot away from where I thought others would venture. Drenched, I dug a hole, turned my back on it, whipped down my waterproofs and squatted. I swear I could hear Andy giggling away in the distance. The timing of this was more than inconvenient: a bad stomach, pissing down rain showering down over me and toilet paper that was soaked through…but I made it through!

I returned to the car to find that Andy had completed the pack up process with a massive grin on his face: “Brutal?” Understatement! We took the wet gear home ready to dry off, glad that we hadn’t actually been able to get the car for longer as we wouldn’t have been able to have made the most of the extra night since the rain didn’t let up for the rest day or the next. Instead it meant a day of sorting out the admin and having a lazy day at home.

By golivethejourney.com
On September 7, 2017
2 Comments

Dinner time is by far one of my favorite times of the day when camping. Sitting down and preparing vegetables as the sun starts to set is the perfect opportunity […]
Camping Dinner Delights

Grub on the go!

For me a camping lunch is all about transportation – making sure you have something that you can carry with you for whatever fun adventures you have planned in the […]
Grub on the go!
Loading Comments...
Comment
×
<span>%d</span> bloggers like this: